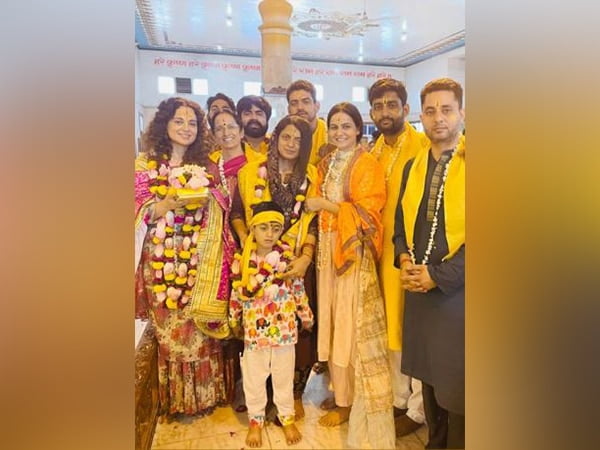 Mathura (Uttar Pradesh) [India], September 19 (ANI): Bollywood actor Kangana Ranaut, on Monday, visited the Thakur Banke Bihari temple in Vrindavan, where she along with her family offered prayers.
A crowd of devotees and locals were seen running towards her as she got down from the car on the VIP route heading towards the Banke Bihari temple. Tight security had to be arranged to make Kangana’s exit from the temple possible.

Kangana reached the temple’s VIP area inside a circle of security guards and there, amidst Vedic chanting, she was engrossed in offering prayers for some time. Following that, she chanted “Radhe Radhe” and left for the Nidhivan Raj Temple, which is the birthplace of Banke Bihari.

After worshipping there too, Kangana interacted with the media and said, “it is our good fortune that we get the privilege of seeing Krishna and Radhe Maa.”
The actor said she had come here to seek lord Krishna’s blessings at his birthplace as she has completed filming her second directorial movie ‘Emergency’. During her visit, the actor avoided answering any politics-related questions.
Kangana had also shared a picture from her Mathura visit on her Instagram stories along with the caption, “Jai Shri Krishan.”

Meanwhile, apart from ‘Emergency’, the ‘Queen’ actor also has director Sarwesh Mewara’s ‘Tejas’ in her kitty, in which she will be seen portraying the role of an Indian Air Force pilot. The official release date of the film is still awaited. (ANI)

ALSO READ:  "Germany can learn a lot from India when it comes to digitisation": German envoy