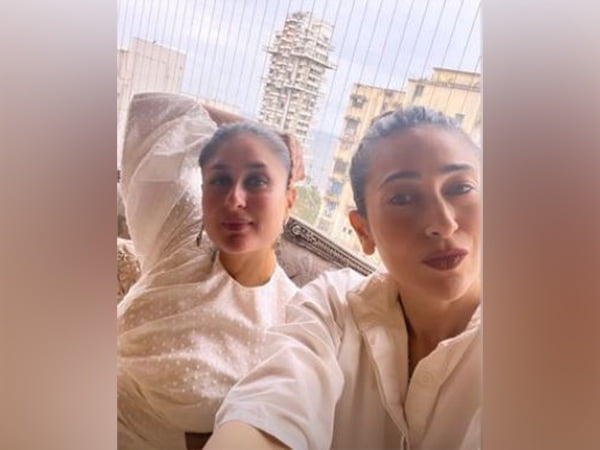 In the first glimpse, Kareena is holding her younger son Jehangir Ali Khan, who is blowing out the candles, from the cake-cutting event. He seems enthralled with the fruit cake. The story message read, “Birthday wishes.”

Another glimpse shows Kareena and Karisma taking a selfie together. They were dressed in white as they posed for the camera during the gathering. “And the twinning continues,” Karisma captioned the photo she shared.

Karisma Kapoor also shared these adorable throwback ‘glimpses’ from their childhood memories. She wrote in her caption: “To the bestest sister and my best friend. Happiest birthday. Always twinning and winning. Happy birthday.”
Kareena Kapoor is the daughter of veteran stars Randhir Kapoor and Babita, she is also the granddaughter of legendary actor and filmmaker Raj Kapoor and the great-granddaughter of actor Prithviraj Kapoor.
Meanwhile, on the work front, Kareena was seen in ‘Laal Singh Chadha’ opposite Aamir Khan. She also recently wrapped up shooting her OTT debut project helmed by Sujoy Ghosh. The film is based on the Japanese novel ‘The Devotion of Suspect X’, which also stars Jaideep Ahlawat and Vijay Varma in the lead roles.
She also has started preparing for Hansal Mehta’s film. On the other hand, her sister Karisma is all set to come up with Brown, a project directed by Abhinay Deo of Delhi Belly fame. (ANI)