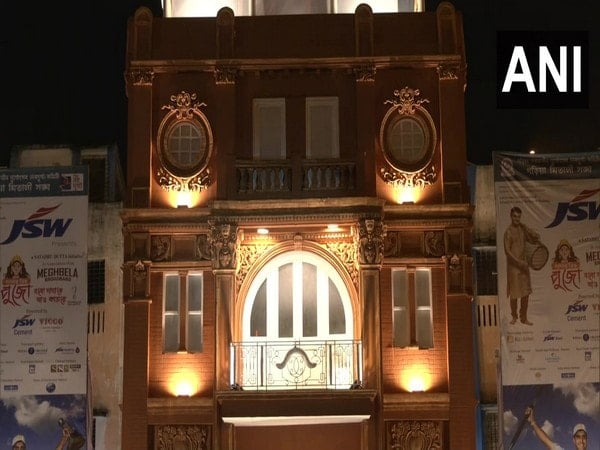 Kolkata (West Bengal) [India], September 28 (ANI): The devotion during Durga Puja and craze for ‘Prince of Kolkata’ and former skipper Sourav Ganguly are two of many things that define and unite the state of West Bengal, especially Kolkata.
On Tuesday, when the Mitali Sangha community erected a stunning Durga Puja pandal in Garia themed after the Lord’s Pavillion, which recalled became the sight of one of cricket history’s most iconic moments back in 2002.

That moment in July 2002 at the Lord’s, also known as the ‘Home of Cricket’, when Yuvraj Singh (69) and Mohammed Kaif (87*) helped India chase down a gigantic 326-run target set by England in the Natwest series 2002 final.
After the total was chased down, Ganguly was so ecstatic that he took off his shirt and twirled it from the balcony. It was then-Indian skipper’s response to a similar act by English all-rounder Andrew Flintoff after a series-levelling win over India at Wankhede Stadium of Mumbai, another iconic cricketing venue of India, earlier that year.
Over the years, this moment became highly iconic, foreshadowing India’s dominance in foreign lands, particularly SENA countries (South Africa, England, New Zealand, Australia) in years to come. With that act, Ganguly had unleashed a bold, defiant and fearless India and the national team adopted these traits in years to come, especially under the leadership of star batter Virat Kohli.
A

The Hindu festival of Durga Puja, also known as Durgotsava or Sharodotsava, is a yearly celebration that honours the Hindu goddess Durga and commemorates her victory over Mahishasur.
To destroy Mahishasura, Goddess Druga appeared from the fusion of all the gods’ energies in heaven. She had ten arms, and on each of them, she carried the most lethal weapon belonging to each God. All of Goddess Durga’s weapons are sanctified during this time.
Over the years, Durga puja has become an inseparable part of Indian culture with innumerable people celebrating this festival in their own unique way while pertaining to tradition. Hindu mythology holds that the goddess comes to her earthly abode at this time to bless her devotees. For the Bengali community, Durga Puja is the biggest festival. This year Maha Shashti falls on October 1 and Vijaya Dashami on October 5.
The significance of Durga Puja goes beyond religion and is revered as the celebration of compassion, brotherhood, humanity, art and culture. From the reverberation of ‘dhaak’ and new clothes to delicious food, there remains a merry-go-round mood during these days.
In other parts of the country, during the nine-day Navratri festival, devotees worship Maa Durga’s nine incarnations in order to obtain her blessings. There is a goddess manifestation linked with each day of Navratri.
During these nine days, people maintain ritualistic fasts, recite shlokas dedicated to each goddess, wear new clothing, offer bhog, and clean their homes.
In their prayers, they ask the goddess for her favour in order to have prosperous, joyous and fulfilled lives. (ANI)