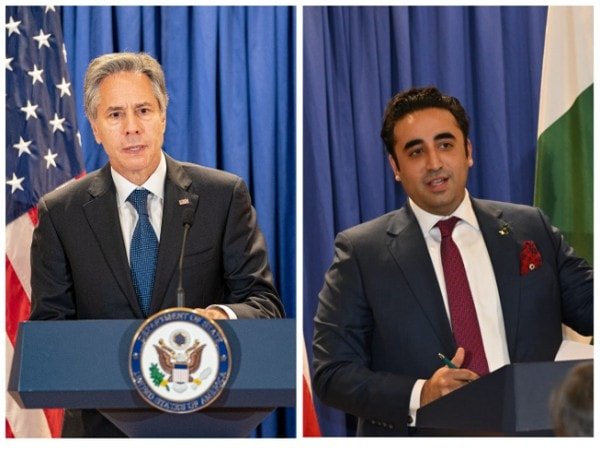 Washington [US], September 27 (ANI): US Secretary of State Antony Blinken met Pakistan Foreign Minister Bilawal Bhutto Zardari on Monday and held talks on several key issues including the importance of managing ties with India and engagement with China on the issue of debt relief.
The two foreign ministers met in Washington in the backdrop of devastating floods in Pakistan that has claimed more than 1,600 lives and put a huge economic burden on the already struggling economy.
“In our discussions today, we talked about the importance of managing a responsible relationship with India, and I also urged our colleagues to engage China on some of the important issues of debt relief and restructure so that Pakistan can more quickly recover from the floods,” Blinken said in his remarks during his meeting with his Pakistani counterpart.
During the meeting, Secretary Blinken highlighted that the US has marshalled over USD 56 million in humanitarian aid to Pakistan in the aftermath of massive floods. He said the US has sent about 17 planes full of supplies like food and materials to build shelters, tents and tarps.
Blinken also announced another USD 10 million in food security assistance to help Pakistani farmers recover from the damage caused by the floods.

In his remarks, Bilawal conveyed the ground realities in Pakistan that he said have changed fundamentally since the massive floods hit the country. The Pakistan foreign minister said his country was experiencing a climate catastrophe of biblical and apocalyptic proportions.
The Pakistani minister said a third of his country is underwater, more than the land mass of the United Kingdom. “Of the 33 million people affected, 16 million are children. Of the 1,600 deaths that we’ve had so far, a third of them have been children.”
Pointing to Pakistan’s low global carbon output, Bilawal said his country looks to the US for assistance and support to get their people climate justice. He said that both sides must turn this crisis in Pakistan into an opportunity and build back better, and become more climate resilient.
He said the Pakistan-US relationship is resilient and has stood the test of time. “And I believe that when we don’t work together, then we fumble, then we falter, then things go wrong,” the minister added.
The faltering US-Pak ties got a boost following the ouster of former Pakistan Prime Minister Imran Khan in April this year. Khan had accused the Biden administration of hatching a conspiracy against him.
Recently, US State Department approved a Foreign Military Sale (FMS) to the Pakistani government for the sustainability of the Pakistan Air Force F-16 fleet, which drew the ire of the Indian government. (ANI)