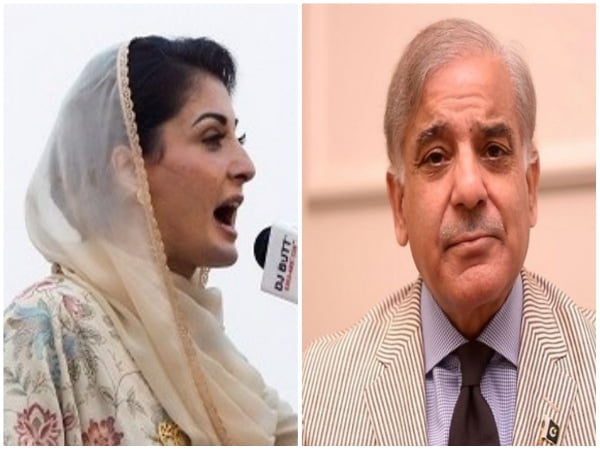 Islamabad [Pakistan], September 25 (ANI): A leaked conversation between Pakistan Prime Minister Shehbaz Sharif and a government official reveals PML-N Vice President Maryam Nawaz had asked the premier for machinery for a power plant to be imported from India for her son-in-law.
The alleged tape was shared by the Pakistan Tehreek-e-Insaf (PTI) leader Fawad Chaudhry, on his Twitter account yesterday. The clip contains a discussion regarding Maryam Nawaz’s son-in-law, reported local media.
In an over two-minute audio recording clip, a voice — said to be that of Shehbaz Sharif — can be heard saying that Maryam Nawaz Sharif had asked him to facilitate her son-in-law Raheel for the import of machinery for a power plant from India.
“If we do so, we will get a lot of flak when this matter goes to the ECC and cabinet,” the official can be heard saying in the audio clip, as per Dawn.
At this, Prime Minister’s purported voice can be heard saying: “The son-in-law is very dear to Maryam Nawaz. Tell her very logically about this and then I will talk to her.”
The same voice also agrees with the perception that this would be bad for optics and may cause political trouble, according to the Dawn.
Notably, Maryam Nawaz’s daughter Mehrunnisa married industrialist Chaudhry Munir’s son Raheel in December 2015.
Meanwhile, more audio clips featuring leaders of the ruling coalition surfaced on Sunday.
The clips which surfaced today, shared on Twitter by several PTI leaders, concerned embattled Finance Minister Miftah Ismail and the resignations of PTI lawmakers from the National Assembly.
Today’s leaked clip featured Maryam Nawaz’s alleged audio conversation in which she can be heard advising the Prime Minister to jack up fuel prices, ARY News reported.
The PML-N leader also complained about Finance Minister Miftah Ismail in an alleged leaked audio.
“Uncle! US dollar is increasing and Miftah Ismail even not taking responsibility of the hike,” she said as quoted by ARY News.
While praising Ishaq Dar, Maryam can be heard in the audio leak, saying “Dar sahab has control on things, he knows what to do, but Miftah does not.”
She said Miftah Ismail does not even know what he is doing and what results his actions will bring in the future.
While the next clip allegedly concerns a conversation between the premier, Defence Minister Khawaja Asif, Law Minister Azam Tarar, Interior Minister Rana Sanaullah and former NA speaker Ayaz Sadiq about the resignations of PTI lawmakers from the lower house of parliament.
The leaders of Imran Khan’s party raised questions over the security of the Prime Minister’s Office. (ANI)

Wave of happiness among people over opening of India-Bhutan border