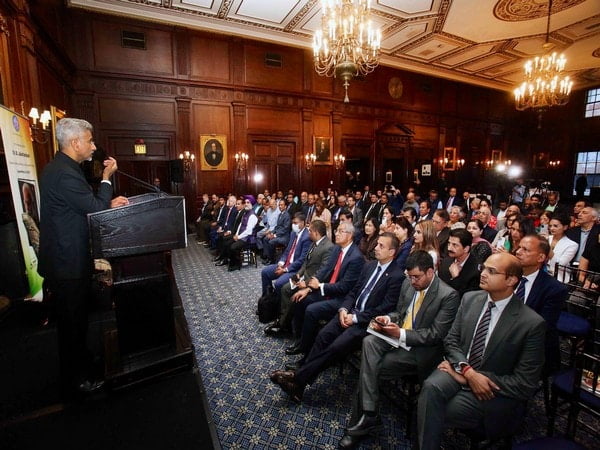 New York [US], September 23 (ANI): External affairs minister S. Jaishankar, who contributed to a special book titled ‘[email protected]: Dreams Meet Delivery’ which commemorates 20 years of Prime Minister Narendra Modi in public life, read excerpts from the book and shared candid moments of his work relationship with the Prime Minister.
‘[email protected]: Dreams Meet Delivery” is a compilation of chapters written by S Jaishankar, Amish Tripathi, PV Sindhu, Anupam Kher, Amit Shah and Sudha Murthy, among others. In the book, Jaishankar penned down how he first met the Prime Minister and shared the same with members of the Indian-American Community in New York.

The External Affairs Minister very eloquently recalled the first time he met PM Modi back when he was the ambassador in China and Prime Minister Modi was the Chief Minister of Gujarat.
“No question he stood out. And I frankly liked Mr Modi, before I met Modi,” Jaishankar expressed.
He distinctly remembered PM Modi’s eye for detail and preparedness. “He wanted a political briefing, which normally chief ministers are not bothered about, but he gave me an excellent reason. He said, “Look, I’m abroad. I’m from a different political party. But I do not want to say something which is even a millimetre different from what is my national policy,” Jaishankar said during the address.

Jaishankar further shared when he once again met PM Modi. “it’s not like you know, we had some huge prior personal connect It’s someone I have known really for about 10 years. What stood out for me were his really exceptional working habits and his commitment and his desire… that fire in the belly to change the country was very visible,” Jaishankar concluded.
This book traces the journey of PM Modi that started from the moment he became the Chief Minister of Gujarat in 2001.
After his landslide victory in 2014, he was re-elected in 2019 after he won over the public with his charisma and his terms of work. Unlike any of his predecessors, PM Modi managed to create a wave of mass approval that built the pillars of his 20-year-long hold as the head of the government.
Union Minister Jaishankar in his conversation shared the reason behind the rise of somebody from an extremely humble background to the ultimate seat of power in India.
“I would say Modi himself is a product of that change. That is the fact that someone like him eventually has become prime minister of India itself shows how much the country has changed,” Jaishankar asserted.
In this book, the compilation of chapters about PM Modi’s model of governance has been contributed by domain experts and eminent critics.
Starting from the grassroots-level transformation in Gujarat to the changing political fabric of India, [email protected] is an expansive exploration of the Indian Prime Minister’s governance. (ANI)

ALSO READ:  China falls into its own debt trap as loans under Belt and Road Initiative pile up