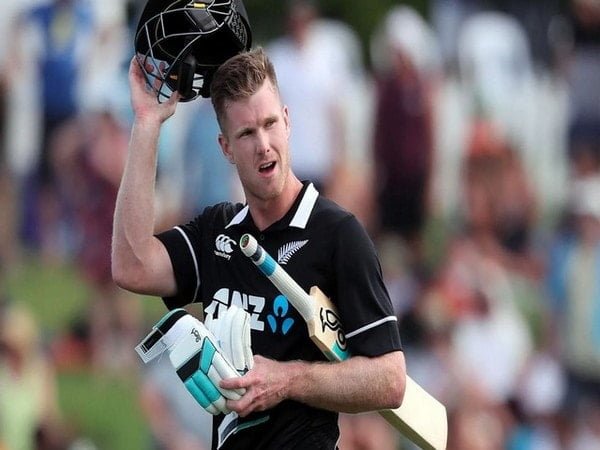 Wellington [New Zealand], September 16 (ANI): All-rounder James Neesham opted out of the New Zealand Cricket central contracts list for the 2022-23 season owing to pre-arranged agreements with domestic T20 leagues across the globe.
The New Zealand cricket board on Friday released the central contracts list for the 2022-23 season.
As with other non-contracted players, Neesham will still be considered for Blackcaps selection when available.
The kiwi player said he will face criticism over his decision to not accept the contract.
“I know the news of my decision to decline a central contract today will be seen as me choosing money over representing my country,” Neesham wrote on his Instagram stories.
“Playing for the Blackcaps has been the greatest honour of my career and I remain committed to taking the field with my countrymen for the foreseeable future, especially in pinnacle world events,” added the Kiwi all-rounder.
Blair Tickner and Finn Allen have been handed their first central contracts with New Zealand Cricket, effectively filling the vacancies left by Trent Boult and Colin de Grandhomme’s departures.

Tickner, a Central Stags pace bowler, has played six ODIs and 11 T20s for the Kiwi team, while Allen, a 23-year-old Wellington batsman, has played eight ODIs and 13 T20s.
Both were on the Blackcaps’ winter tours of Ireland, Scotland, and the Netherlands. Allen was also on the team’s most recent series in the West Indies and Australia.
New Zealand coach Gary Stead stated that each of the newcomers to the central contracts list had been in the top 20 announced in May and had taken advantage of their opportunities in the interim.
“Blair’s been in Blackcaps squads for all three formats over the past 12 months which is testament to his progress,” Stead said. “He’s a bowler who just keeps improving and we’ve been particularly impressed with his red-ball development, which saw him in the recent squads for the England and South Africa Tests. He knows the environment, understands his role, and bowls with good pace and aggression,” said the coach.
Allen, 23, is an up-and-coming batter with already over 600 runs in 21 internationals. The coach praised the batter and claimed that the batter has great potential.
“Finn clearly has huge talent and potential,” Stead praised the batter. “He’s shown he’s up to the international level in his limited opportunities to date. In particular, his match-winning 96 against West Indies on a difficult wicket in Barbados showed his class and maturity,” said Stead.
New Zealand will next be seen in a home T20 Tri-Series along with Pakistan and Bangladesh starting on October 7. (ANI)

Priyanka-Nick off to unkown location to celebrate Nick’s birthday