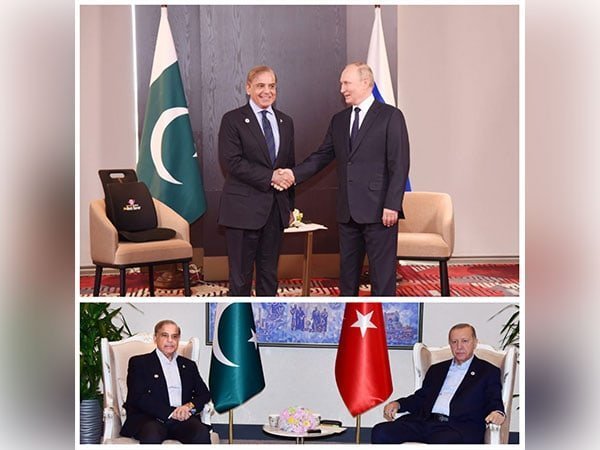 Samarkand [Uzbekistan], September 16 (ANI): On the sidelines of the Shanghai Cooperation Organisation (SCO) summit in Samarkand, Pakistan Prime Minister Shehbaz Sharif held a meeting with some of the leaders of the grouping and apprised them of the situation in the flood-ravaged country and vowed cooperation in key sectors like trade and investment.
PM Sharif on Thursday arrived in Uzbekistan on a two-day visit to attend the annual meeting of the Shanghai Cooperation Organisation’s (SCO) Council of Heads of State (CHS).
In a tweet, Shehbaz Sharif wrote, “It was a long but productive day in Samarkand. In my meetings with leaders of our friendly countries, we agreed on enhancing trade & investment. I explained the flood ravages due to climate change. Food & energy shortages present a real challenge to our shared development agenda.”
This comes as the Monsoon rains have submerged a third of Pakistan, claiming more than a thousand lives since June and unleashing powerful floods that have washed away swathes of vital crops and damaged or destroyed more than a million homes.
Pakistani Officials have blamed climate change, which is increasing the frequency and intensity of extreme weather worldwide.

Ahead of the SCO Summit, Russian President Vladimir Putin and Pakistani Prime Minister Shehbaz Sharif held a bilateral meeting. After the meeting with Putin, Shehbaz Sharif also held a bilateral meeting with Tajikistan’s President Emomali Rahmon.
The two leaders held wide-ranging talks covering all aspects of mutually beneficial bilateral cooperation, including regional and international issues. The prime minister thanked Tajikistan for its support to the flood affectees in Pakistan and shared details of the devastation caused by the massive floods, reported Pakistan’s local media outlet Geo TV.
Uzbekistan is the current chair of SCO 2022 and India will assume the annual rotational presidency of the SCO at the end of the Samarkand Summit.
The SCO currently comprises eight Member States (China, India, Kazakhstan, Kyrgyzstan, Russia, Pakistan, Tajikistan and Uzbekistan), four Observer States interested in acceding to full membership (Afghanistan, Belarus, Iran, and Mongolia) and six “Dialogue Partners” (Armenia, Azerbaijan, Cambodia, Nepal, Sri Lanka and Turkey).
The Shanghai Five, formed in 1996, became the Shanghai Cooperation Organisation (SCO) in 2001 with the inclusion of Uzbekistan. With India and Pakistan entering the grouping in 2017 and the decision to admit Tehran as a full member in 2021, SCO became one of the largest multilateral organisations, accounting for nearly 30 per cent of the global GDP and 40 per cent of the world’s population. (ANI)