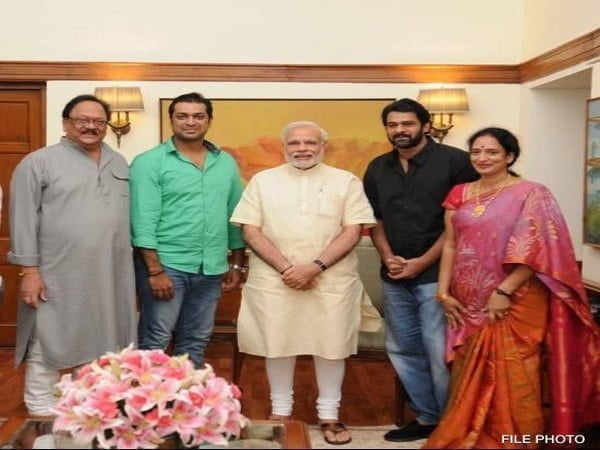 New Delhi [India], September 11 (ANI): UV Krishnam Raju, former Union Minister, and veteran Telugu actor, who was popularly known as the ‘Rebel Star’, died at the age of 83, while undergoing treatment at a private hospital in Hyderabad. Prime Minister Narendra Modi offered his condolences on social media.
Krishnam Raju was the uncle of ‘Bahubali’ actor Prabha. The veteran actor was the first actor who worked as a Union Minister under the cabinet of former Prime Minister Atal Bihari Vajpayee.
He made his debut in the film industry with the Telugu film ‘Chilaka Gorinka’ in 1966 which was produced and directed by K. Pratyagatma. Raju did more than180 films in his career.
PM Modi extended his condolence over the demise of a Telugu actor. He wrote, “Saddened by the passing away of Shri UV Krishnam Raju Garu. The coming generations will remember his cinematic brilliance and creativity. He was also at the forefront of community service and made a mark as a political leader. Condolences to his family and admirers. Om Shanti.”

Saddened with the veteran actor’s demise, Amit Shah tweeted, “Pained to learn that the beloved star of Telugu Cinema and former Union Minister, U Krishnam Raju Garu has left us. He won millions of hearts with his versatile acting & worked for the betterment of society.His passing away leaves a deep void in our Telugu cinema. My condolences.”

According to Telangana CMO Chief Minister K. Chandrasekhar Rao has directed Chief Secretary Somesh Kumar to conduct the funeral of his dearest friend and former Union Minister Krishnam Raju with an official ceremony. CS Somesh Kumar will make arrangements as per CM’s orders.

Earlier, Rajnath Singh took to his Twitter handle and wrote, “Shocked by the demise of Legendary Actor and former MP, Krishnam Raju garu. He will be remembered for his excellent performances in several Telugu films. He had a wonderful and magnanimous personality. My condolences to Prabhas, his entire family and admirers. Om Shanti.”
Chief Minister YS Jagan Mohan Reddy expressed grief over the demise of actor Prabhas’s uncle Krishnam Raju.
The Chief Minister lauded the contribution of the rebel star, as he was popularly known, to film land and public life and conveyed his condolences to the bereaved family members.
Andhra Pradesh Governor Biswabhusan Harichandan also expressed grief after the demise of a veteran Tollywood actor.
Governor Harichandan said, Krishnam Raju served as a Member of Lok Sabha from 1999 to 2004 and held the portfolios of Rural Development, Consumer Affairs, Food & Public Distribution, Defence and External Affairs as Union Minister.
The Governor offered his heartfelt condolences to the bereaved family members and prayed for the departed soul to rest in peace.
Chief Minister K. Chandrasekhar Rao extended his deepest condolences to the family members of late Krishnam Raju.
He said that the death of Krishnan Raju, who acted as a hero in many films during his fifty-year career and won the hearts of moviegoers as a ‘rebel star’ with his unique acting style, is a great loss for the Telugu silver screen.
The CM added, the death of Krishnam Raju, who served the people of the country as a member of the Lok Sabha, as a Union Minister and through the field of political administration, is sad. Prayed for his soul to rest in peace. (ANI)