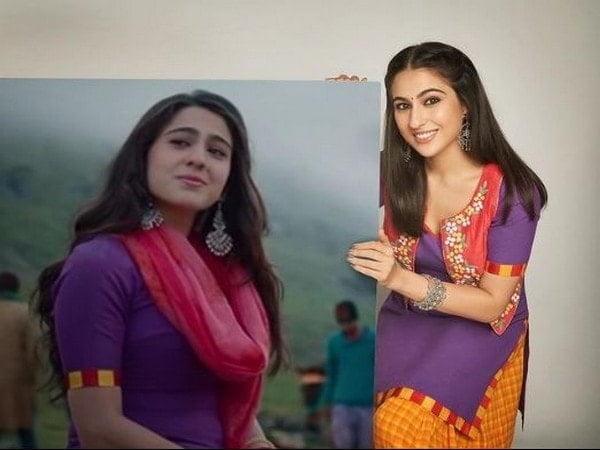 Mumbai (Maharashtra) [India], September 17 (ANI): Bollywood actor Sara Ali Khan relived the memories of her debut film ‘Kedarnath’ by repeating outfits from the film. The actor on Friday dropped a picture on social media.
Taking to her Instagram handle, the ‘Love Aaj Kal 2’ actor treated fans with new pictures and left them inspired by repeating clothes.
Sharing the picture, she wrote, “Decided to repeat my Kedarnath wardrobe. Sometimes repeating is the closest to reliving.”

In the picture, Sara could be seen holding a cardboard with a look from the film, which she recreated in the latest picture.
She was seen dressed in a purple-orange salwar suit. But Sara made some changes in the look as she opted for an orange shrug instead of a dupatta that she wore for the film look.
The ‘Atrangi Re’ actor carried a dewy makeup look and accessorized her outfit with statement jewellery.
The 27-year-old actor kept her tresses open to match the look.
Sara Ali Khan made her acting debut alongside Sushant Singh Rajput in her 2018 flick ‘Kedarnath’, directly by Abhishek Kapoor. The plot of the movie was based on the devastating floods which occured in Uttarakhand in 2013.
The film was an inter-faith love story between a wealthy Hindu girl (played by Sara) and a pithoo Muslim boy (played by Sushant). Sushant walked long distances with Sara on his back as a requirement for the film.
She is quite active on social media and keeps sharing glimpses of her personal and professional life with her fans through Instagram.
The actor also posts glimpses of her travel getaways to exotic locations as well.
Meanwhile, on the work front, Sara will be seen sharing screen space with Vicky Kaushal in Laxman Utekar’s next. She also has ‘Gaslight’ with Vikrant Massey and Chitrangada Singh. The film is being directed by Pawan Kriplani who earlier helmed ‘Bhoot Police’ and is bankrolled by Ramesh Taurani. (ANI)