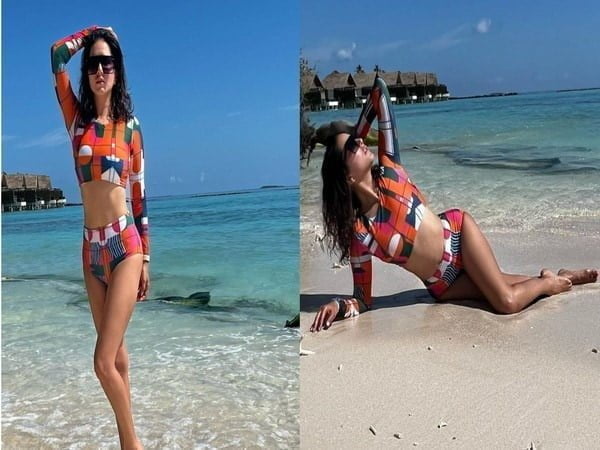 New Delhi [India], September 16 (ANI): Bollywood actor and model, Sunny Leone, on Thursday, shared some hit bikini pictures from her Maldives trip.
Taking to Instagram, Sunny shared a sling of pictures, which she captioned, “Love this bikini. Saved my arms and shoulders from burning!! Thanks.”

In the pictures, the ‘Ragini MMS 2’ actor could be seen posing at the Maldives beach in a colourful bikini.
Soon after the model dropped these pictures, fans swamped the comment section with red heart and fire emoticons.
“You are my inspiration Mam,” a fan commented.
Another fan wrote, “Superrrr hot”
Sunny is currently enjoying her vacation along with her husband Daniel Weiber.
Along with the bikini pictures, the ‘Jism 2’ actor shared a video, in which she could be seen enjoying the fire show at the beach along with her husband.
Taking to Instagram, Sunny shared the video, captioning it, “Fire show!! One man show and absolutely amazing. Thanks for the private dinner on the beach and fire show! Won’t ever forget this night! @dirrty99.”

Meanwhile, Sunny was recently seen in a music video ‘Naach Baby’ along with choreographer Remo D’Souza, which received positive responses from the audience.
On the film front, she will be next seen in director Anurag Kashyap’s next film and in director R Radhakrishna’s ‘Patta’, alongside Sreesanth.
Along with that she also has ‘Veeramahadevi’. The film is a multilingual period movie directed by Vadivudaiyan. (ANI)