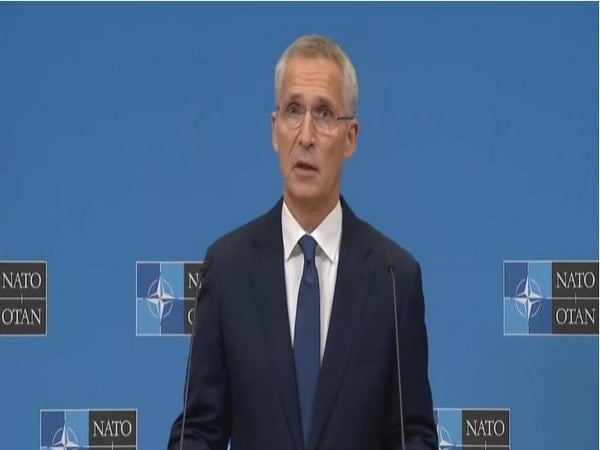 Brussels [Belgium], September 30 (ANI): NATO has called on all states to reject Russia’s annexation of Ukraine’s Donetsk, Luhansk, Zaporizhzhia and Kherson regions.
NATO Secretary-General Jens Stoltenberg, in a video address, said, “We call on all States to reject Russia’s blatant attempts at territorial conquest. These lands are Ukraine, Donetsk is Ukraine, Luhansk is Ukraine, Kherson is Ukraine, Zaporizhzhia is Ukraine, just like Crimea is Ukraine.”
This statement came after Russia formally announced the annexation of four regions – Donetsk, Luhansk, Kherson and Zaporizhzhia and claimed that “this is the will of millions of people.
In the video address, Stoltenberg said that the ‘sham’ referendum was designed in Moscow. He also called the imposition of the referendum on Ukraine a total violation of international law.
“This land grab is illegal and illegitimate. NATO allies do not and will not recognise any of these territories as part of Russia,” NATO Secretary-General said.
While commenting on Ukraine’s application to join NATO, Stoltenberg recalled the NATO Summit in Madrid and said that NATO clearly said that they support Ukraine’s right to choose its own path and to decide what kind of security arrangements it wants to be part of.
“Decision on membership has to be taken by all 30 allies. We take these decisions by consensus. Our focus now is on providing immediate support to Ukraine, to help it defend itself against a Russian brutal invasion. That’s the main focus of NATO allies as we speak,” he added.

Earlier, Ukraine President Volodymyr Zelenskyy said that his country is submitting an “accelerated” application to join the NATO military alliance.
“We are taking our decisive step by signing Ukraine’s application for accelerated accession to NATO,” reported Al Jazeera quoted Zelenskyy as saying.
Russia’s annexation sparked wide criticism from around the world. The United States announced that it will impose a “swift and severe cost” on Russia.
The Biden administration official said they are “targeting additional Russian government officials and leaders, their family members, Russian and Belarusian military officials, and defence procurement networks, including international suppliers supporting Russia’s military-industrial complex” through announcements from the Departments of Treasury, Commerce, and State, according to CNN.
That includes sanctions from the Treasury Department on a key player in keeping the Russian economy afloat: Elvira Nabiullina, an economist who has been leading Russia’s central bank since 2013.
Meanwhile, European Council also condemned Russia’s “illegal” annexation of Ukraine’s territory and accused the Kremlin of putting global security at risk.
“We firmly reject and unequivocally condemn the illegal annexation by Russia of Ukraine’s Donetsk, Luhansk, Zaporizhzhia and Kherson regions. By wilfully undermining the rules-based international order and blatantly violating the fundamental rights of Ukraine to independence, sovereignty and territorial integrity, core principles as enshrined in the UN Charter and international law, Russia is putting global security at risk,” the statement reads. (ANI)

US condemns ghastly attack on education centre in Kabul