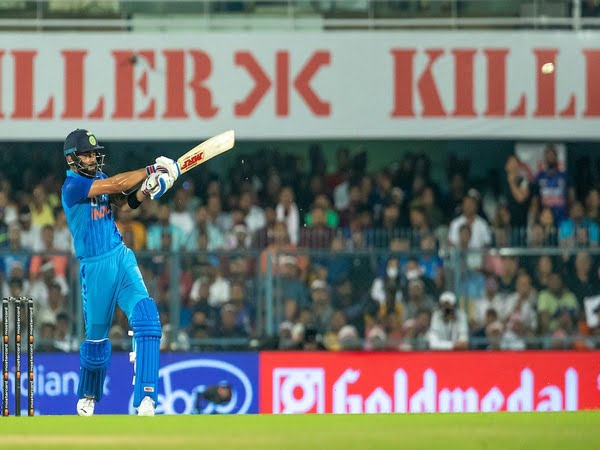 Indore (Madhya Pradesh) [India], October 3 (ANI): India’s star batter Virat Kohli is likely to be rested for the third T20I between India and South Africa which will be held in Indore on Tuesday.
According to BCCI sources, the former India skipper is likely to be rested for the third T20I against Proteas as Kohli needs to be in the best form when India plays their T20 World Cup opening match against Pakistan at the iconic Melbourne Cricket Ground on October 23.
India have already gained an unassailable lead of 2-0 over South Africa. With Men in Blue defeating South Africa by eight wickets and 16 runs in the first and second T20I respectively to clinch the series, the third game at the Holkar Stadium on Tuesday evening becomes a dead rubber.
Kohli on Sunday became the first India to complete 11,000 runs in T20 history. He achieved this feat during the second T20I against South Africa here at Barsapara Cricket Stadium, Guwahati on Sunday. In the match after scoring 19 runs, Virat became the fastest to reach 11,000 T20 runs in just 354 matches.

Former India skipper slammed a stunning six over the long-off in the Wayne Parnell’s over to reach this milestone. With that six in Parnell’s over Kohli registered his name in the history book to become the first Indian to complete 11,000 runs in T20 history.
During the second T20I against South Africa, Kohli displayed his class. For a moment, everything was mesmerized by the beautiful shots that Suryakumar Yadav was playing but Kohli made his presence count with some quality shots around the park and scored an unbeaten 49.
After struggling with poor form the wait for Kohli’s 71st century finally came to an end during the Asia Cup after 1,020 days. He smashed a stunning 122* off 61 balls against Afghanistan, and in doing so equalled Ricky Ponting’s record of 71 international tons.
Virat Kohli found his touch during the recently concluded Asia Cup 2022, in which he finished as the second-highest run scorer in the tournament and also scored his much anticipated 71st international ton.
Kohli scored 276 runs in five matches at an average of 92.00 with one century and two half-centuries. (ANI)