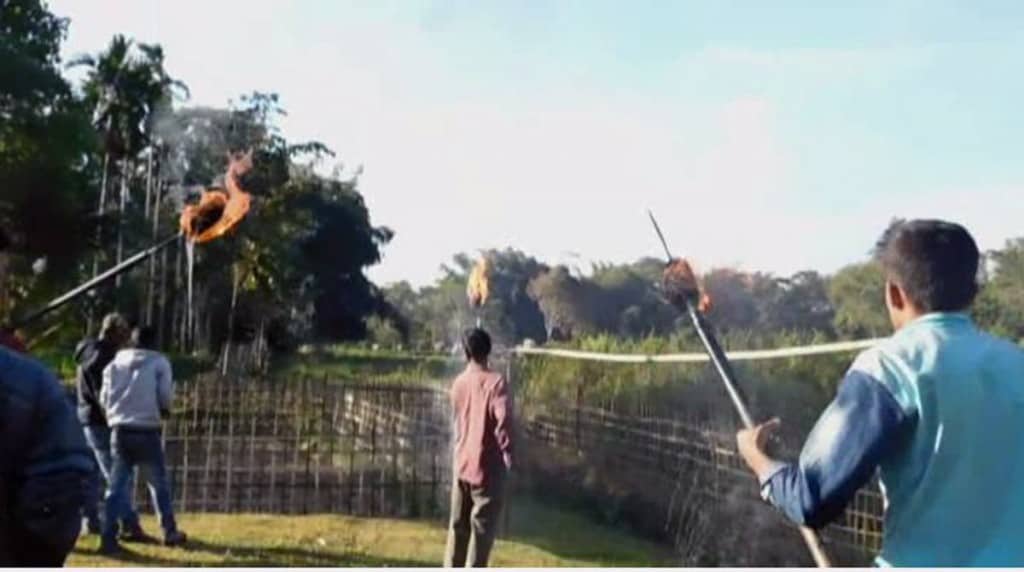 Over the years, in many places of Assam it is like a do-or-die situation for hundreds of villagers as well as elephants – for their survival. With frequent elephant raids, beleaguered villagers in Upper Assam’s Numaligarh are taking extreme steps to fight elephant menace, even risking their lives and making situations dangerous for both.

The situation this time has become more dangerous than ever before. It has been for more than three months that the battle between wild elephants and human is refusing to die down any time soon.

Numaligarh is seeing the worst man-elephant conflict crisis in a decade. Frequent war with the wild elephant herds is creating chaos and fear psychosis on both sides. Circumstances have compelled villagers to push to extreme limits leaving aside their fear for lives to chase elephants out of their vicinity. Even though there is no immediate sigh of relief, the only satisfaction for the villagers is to fight these elephants tooth and nail. “There is no point now giving respect and worshiping these elephants. All we know is that wherever and whenever we face them, we need to attack, that’s all,” a villager said, who was ready to fight the wild.

“Even before we could finish our food in the evening, elephants march to our villages and we have to come out to fight them. Can’t even sleep properly; forget about cultivation. Ironically, there are no foresters here,” the villager added.

While the villagers are at a loss after the frequent conflicts, the elephants on the other side are in no mood to stop their raids in the nearby paddy fields. At night, people of Morongi, Goronga, Teliagoan, Dholakachari, Doigrang and other villages prepare themselves to fight elephants.

The habitats of wild elephants in Bijuli Bonanchal, Nambor, Karbi Pahar and Deo Pahar have been long affected with illegal occupation which gave rise to the man-wild conflicts. “Things were not so bad five years down the line. The situation has changed drastically now,” said a local.

Ironically, some foreign tourists had also reached Numaligarh to experience the war-like situation. “We have not seen this…this is very unique how people live so close to these big animals and we can’t even imagine,” said a curious tourist who has arrived from Holland. Assam forest minister Pramila Rani Brahma has assured compensation for the affected farmers. She added that the situation is all about fight for survival – how mankind destroyed the habitats of these elephants. Brahma’s words are perfect as a forest minister who thinks as an environmentalist and wild life enthusiast, but these things does not go down well with those at the battleground. The affected people hold the forest department exclusively responsible for failing to protect the human lives.

Man and elephant conflicts are not new in Assam. Every year such conflicts take toll on both the sides. While humans face off with the wild elephants result in loss of lives, property and agricultural produce; elephants are also at the receiving end. Elephants are being poisoned, electrocuted and injured by angry villagers.

Amid this serious crisis, there are instances where humans have shown their sensibilities and had helped rescue elephants. Many precious lives were lost in this fight which has brought miseries to many families.

Assam has the highest concentration of elephant population in India. It is found in 36 forest divisions in the state spreading across a total area of 11,601 square km. Assam has the maximum number of elephants, 5,719, followed by 1,754 in Meghalaya and 1,614 in Arunachal Pradesh.

Peter Alex Todd is a Guwahati-based senior journalist. He is a sports and music enthusiast.